This Changes Everything: Excerpt 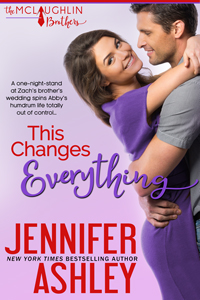 “I now pronounce you husband and wife.”

About effing time. My oldest brother kisses his true love, and the crowd in the church goes wild.

I’m the best man, at Ryan’s side to make sure he can stand up, say his vows, and put the ring on the bride’s finger. Then he’s Calandra’s problem, her job to get him back down the aisle and stand still for pictures. I dust off my hands to show Calandra I’m done with him.

By the way, I’m Zach, brother number two. Behind me in the first row are Ben and Austin, both half-sauced and doing victory dances. At least Austin’s dancing, punching the air and whooping. Ben’s a little quieter, but damn, he’s still gyrating around like a big goof.

Why are we partying so hard already? Because we never in our lives thought Ryan McLaughlin and Calandra Stevenson would get to the altar. It took some doing …

But hold on a sec. This story isn’t about them.

It’s about me. And that gorgeous, long-legged sweetheart behind the bride, who can make anything, even a bright yellow butt-ugly maid-of-honor dress, look amazing.

She’s got black hair, brown eyes, and curves that can stop traffic. She isn’t aware of it—doesn’t have her face in the mirror all the time, like women who can’t get enough of themselves.

Abby was my first kiss.

Yep. When we were thirteen, she and I mashed lips. I thought I’d die right there. My body was like a river of fire, her lips the softest thing I’d ever felt.

After the seriously wet face smash, we did some staring, our faces red, and started yelling at each other. Ended that relationship real quick.

Hard to believe that was almost twenty years ago. I stayed friends with Abby, more or less, but we never mashed lips again. I didn’t care at first because, you know, attention span. Then football ate all my time. It was really, really important, right? More important than watching Abby Warren transform from cute girl to sensuously beautiful woman.

I realized that when she showed up to stay with Calandra, her best friend, to get her to the church on time. She’s maid of honor to my best man, and we’ve been thrown together all week.

Yeah, I notice now. Not that it’s going to do me any good. I think Abby’s with someone or sort of with someone or wants to be with someone, over in Chandler, where she’d moved during high school with her mom when her folks split up. Chandler’s like the other side of the planet when you live in north Phoenix.

The music begins to send us back down the aisle. I step away and grin at Ryan, who is so happy it’s glowing off him. I swear some of his happiness touches me, like a warm splash in the face. He walks Calandra toward the church’s exit, a married man.

Now it’s my turn. I hold out my arm and Abby takes it, just like in rehearsal.

Damn, she smells good. The bright yellow dress rustles into my tux as our hips bump.

Her fingers are strong on my arm, warm through the tux jacket. She smiles at me, her lips an orange-red color from whatever lipstick she’s wearing.

“They did it,” she says to me over the organ music as we skim after my brother and his new wife. “I don’t know what I’m going to do now that I don’t have to talk Calandra into marrying your brother. A big hole just opened up in my calendar.”

“You’ll fill it with something. Every time they have a fight …”

Abby throws me an exasperated glance. “Don’t say that. Besides, it’s your turn. I had the bachelorette party breakdown. You get their first fight.”

I’d heard that Calandra was freaking out a little last night. I got the same from Ryan’s end. Ben, Austin, and me had been ready to tie him up and drag him here today.

“I think they’ll be fine,” I say with confidence. “They just needed to get over the hump.”

We study Ryan and Calandra walking out of the church into the sunlight on this April afternoon, leaning into each other. Yep, those two are in love. Humping definitely on their minds.

It starts to be on my mind too. With Abby against my hip, her dark hair dusted with glitter, the faint perfume designed to drive me crazy, how can I help it? She’s beautiful. Always has been.

« Return to This Changes Everything