The McLaughlin Brothers Volume One 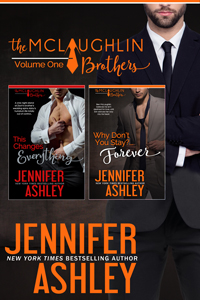 Books One and Two of the McLaughlin brothers, collected into one volume:

This Changes Everything (McLaughlin Brothers, Book 1)

Then comes the wedding, where Zach is best man to the groom, his brother, and Abby is maid of honor. A few bottles and some dancing later, and Abby finds herself waking up next to Zach after a mind-blowing one-night stand.

Zach can’t believe Abby has become such a beautiful woman. Their first kiss, long ago, had been a mess, but being with Abby now stirs a fire in his soul.

But Abby vanishes in the morning, and Zach is left with beautiful memories and a determination to not let her go so easily. Even if he has to recruit his infuriating brothers to help him, Zach is going to find a way to change everything …

When Erin, the McLaughlins’ beautiful new receptionist, accidentally rams Ben in the privates, she’s stricken with remorse. Ben, through his haze of pain, can only think about how lithe and graceful she was dancing in the break room and how her touch is making all the pain go away.

To apologize, Erin invites Ben to her ballet company’s performance, where she nervously dances before him. He’s enchanted, and after the show one thing leads to … many other things.

They agree to keep their encounter secret, but the way things heat up can’t be hidden for long. But Erin, a fellow employee, is off-limits, her ex has returned to be a pain in Ben’s rear, and her job’s only temporary. One day she’ll be gone, and Ben has to figure out how to make her stay … forever.