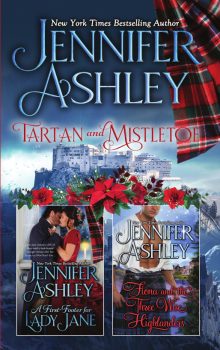 A First Footer for Lady Jane

When Grandfather MacDonald predicts Lady Jane will marry this year’s First-Footer–the first guest into the house on Hogmanay—she dismisses the notion. Her childhood sweetheart is fighting on the Peninsula, and she can’t imagine marrying anyone but the staid Major Barnett.

But when the clock strikes midnight, and Hogmanay begins, a knock at the front door changes Jane’s life forever.

Fiona and the Three Wise Highlanders

Stuart Cameron must fulfill a task to repay the reprobates Gair and Padruig, who have smuggled him across Scotland at Christmas in 1746. Fiona Macdonald, sister to his enemy, forbidden to him, is the only one who can help.

Tied with the Mackenzies / McBrides series, Stuart Cameron is an old friend of Malcolm, Alec, and Will Mackenzie. He appears in The Stolen Mackenzie Bride and Alec Mackenzie’s Art of Seduction.

A First Footer for Lady Jane is a standalone Regency novella.