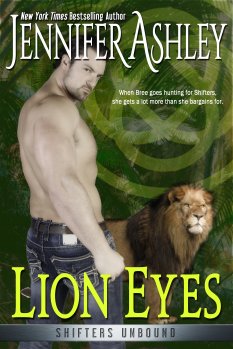 Bree has just decided to give up trying to be a Shifter groupie when a lion Shifter slams into her truck and tells her to drive. Seamus is on the run from hunters, other Shifters, and who knows who else. All Bree knows is that he’s compelling, needs her help, and most intriguing of all, wears no Collar …

Seamus McGuire fears he’s gone crazy—feral—and become a killer. His only hope of getting away from the hunters and police on his tail is Bree, a human woman who not only knows a lot about Shifters but has great compassion for them.

Things are more complicated than they seem, however. Seamus is on a mission, to protect those in his care after the destruction of Kendrick’s compound of un-Collared Shifters. Seamus must keep it together and keep his charges hidden, but at the same time, he’s pulled to Bree as he’s never been pulled to a woman before. He needs to prove he’s innocent and not crazy before it’s too late for himself, Bree, and those he’s vowed to protect.

Lion Eyes debuts in the boxed set Dark and Damaged, in June 2015, then released on its own in print, e-book, and audio in July 2015. 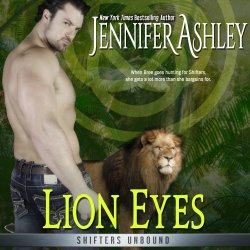