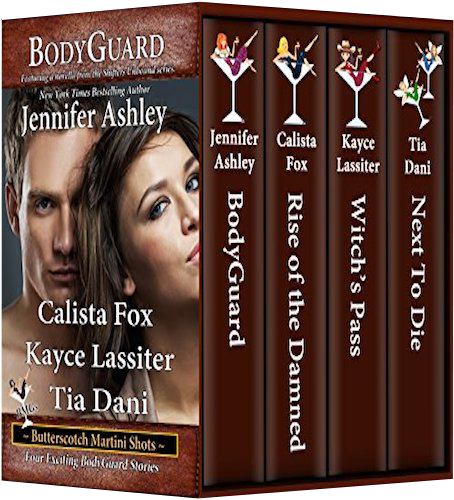 Bodyguards–Men ready to put their lives on the line to save those they swear to protect. Enjoy four stories of bodyguard action by the Butterscotch Martini Girls.

BodyGuard by Jennifer Ashley
Elizabeth Chapman is saved from an armed robber by a giant Kodiak bear who shifts into a large, well-muscled, and fully naked human male. But when it’s revealed that the robber is the brother of a dangerous criminal, Elizabeth finds herself the target of a vendetta. Ronan, the Bear Shifter, takes her to Shiftertown for safety, where Elizabeth learns that the mateless Ronan, alone in the world, takes care of Shifters who have also been left on their own. Having grown up in foster care, Elizabeth can only admire how protective Ronan is. But Ronan will only let Elizabeth leave the confines of Shiftertown if he becomes her 24/7 bodyguard. Elizabeth chafes at the restriction, but agrees. The trouble is, the sassy human Elizabeth is triggering Ronan’s long-buried need to find himself a mate.

Rise of the Damned by Calista Fox
(Forever Mine Series, Book 1)
For centuries, Kage Deville has sworn to protect the mortal soul of Taelyn Abrams—even though it means watching her die over and over. He’s a demon fighting to keep two worlds from clashing in an epic battle and she’s a human slayer summoned to life only when the threat to the mortals becomes too great. But something has gone horrifically wrong this time and Taelyn has no memory of her true mission—or her love for Kage. Though their fiery chemistry and the emotional pull can’t be denied, Taelyn’s current stand might be her last. Unless he can save her, a world will be doomed and she will be forever lost to Kage…
**Prequel to HEART OF THE DAMNED, a Forever Mine full-length novel and a Coffee Time Romance Reviewer Choice Award Winner**

Witch’s Pass by Kayce Lassiter
Witch princess Quayk SpellMaker’s attempt to run away from home, and an arranged marriage to a man she both hates and fears, is foiled by a gargoyle in a cowboy hat, whom her father has hired to find her. But Quayk is determined to end the engagement she views as barbaric in this day and age—at any cost. She soon finds herself under the supervision of the gargoyle bodyguard, Alex McCall, and embroiled in a magical battle that threatens to either take her life or leave her forever without a mate. Alex McCall is torn. The more time he spends ensuring Quayk marries another man, the more he finds himself drawn to the beautiful, quirky witch.

Next To Die By Tia Dani
Recently married, Amanda Jackson relocates to Arizona with her perfect husband. Despite warnings from a girlfriend, she can’t believe an obsessed psychopath is after her. Until she sees her name and the underlined words…next to die. Bodyguard Rick DeLuca reluctantly agrees to what his baby sister asks. Keep an eye on her best friend. The dangerous mess he uncovers reveals the truth behind Amanda’s marriage. Driven by revenge, her perfect husband wants more than to drive her insane. He wants her dead.