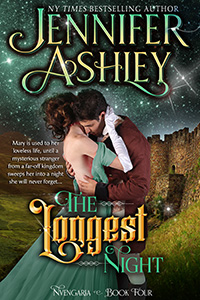 Mary Cameron, a Highland widow with a son, doesn’t believe she is destined to find passion in her life until she meets Baron Valentin, a Nvengarian bodyguard who had been sent to Scotland to protect a princess. When Valentin was hurt in the course of his duties, Mary nursed him and learned his secret—that he was one of the shape-shifting peoples of the Nvengarian mountains, able to take the form of a wolf.

Valentin departed Scotland once the princess married Mary’s brother, and Mary hasn’t seen him since. Now he’s back, sent to keep an eye on the Nvengarian ambassador to England, who might be plotting to overthrow Valentin’s tiny kingdom.

Mary has been put in charge of a young lady, daughter of a late friend, and that daughter has proved a handful. Mary and the young lady are invited into the household of the very ambassador Valentin has been sent to watch, and danger soon follows. The ambassador’s wife insists on learning every custom of an English Christmas, no matter how obscure, keeping Mary running, as do the threats to the lives of all present. Mary and Valentin don’t have much time to explore what they might have had.

But Valentin’s people believe that the person one spends the night with on the longest night of the year—the winter solstice—will remain in one’s life forever. Valentin is willing to put this theory to the test, to discover whether he and Mary will surrender to the magic of The Longest Night …