The Secret of Bow Lane--Excerpt 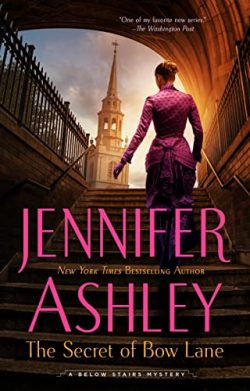 “Woman’s asking for you, Mrs. Holloway.” Elsie, the scullery maid, popped her head into the kitchen one Wednesday morning after breakfast service to make this announcement. “She’s waiting up on the street.”

“What woman?” I was much distracted, having had to serve a larger than usual breakfast. The family in the Mount Street house had returned unexpectedly early from their summer wanderings, and the lady of the house had presumed they’d slide back into day-to-day life without a hiccup.

Little did they know of my mad scramble to the markets, my despair over the bizarre notes Mrs. Bywater, the mistress, had sent down to me about the new dishes she’d learned of while on holiday. How my assistant, Tess, and I had chopped and boiled and baked and tested recipes until we’d nearly collapsed in the roasting heat of the kitchen. Mrs. Bywater had no understanding of food, and everything she’d suggested had to be rethought and remade until it was edible.

“Don’t know, Mrs. Holloway.” Elsie tucked her dishcloth into her apron and retreated to her sink. “She only said she wanted to speak to the cook. It’s important, she says.”

I glanced out the high windows that gave on to the outside stairs, but I could see nothing beyond the grating and the stone sills that needed to be scraped of summer grime.

Earlier in my life, when I’d first become a cook, I’d have dismissed a woman who didn’t leave her name and gone about my business. But these days, as an acquaintance of Daniel McAdam, who had the habit of sending all sorts to me for my help, I felt an obligation to discover what this person needed. Daniel did not always explain clearly what he wished me to do, but perhaps I could learn this from the woman.

“Very well,” I said. “Tess, please set that bread in the oven. It will overflow its pan if it sits any longer and be ruined. Give it an egg white wash and sprinkle a bit of those seeds on first. That will be tasty, I think.”

Tess, of the freckled face and lively eyes, set to work without arguing or bothering to comment, which told me how much she’d settled since coming to work for me.

Tess separated an egg without mishap and whisked up the white. “If there’s another evil person what needs nabbing, you’ll let me help, won’t you?” she said as her fork clinked against the sides of the bowl. “I’ll be staying well out of the way if they’re dangerous, of course.”

“It is not likely to be anything so dire. Do not overbeat the whites, Tess—you want a thin coating to make the seeds stick, not a meringue.”

“Right you are, Mrs. H.” Tess hummed happily as she continued to whisk.

I tucked a stray lock of hair into my cap and departed the kitchen for the back door. Anyone arriving at the kitchen instead of the main house was no one I’d need to change my frock for, and I was too busy to even  remove my apron.

Cool air wafted to me as I hurried up the stairs, the heat of summer finally broken. My kitchen had often been as hot as my oven these past few months. A sensible person would have found a way to leave London for the summer, but I had a reason to stay, and I did not mean my post as cook in a Mount Street home.

I assumed the woman who stood in a sunny patch next to the house’s railings was the lady who wished to speak to me. Her back was to me as she idly watched delivery wagons pass, so all I saw was her serviceable dark brown frock, a straw-colored shawl to keep out the wind, and a hat with one limp ribbon.

“Madam?” I called as I reached the top stair. “I am Mrs. Holloway. What may I help you with?”

She turned and faced me.

My cheerful greeting died as my lips grew numb, my mouth dry. My heart beat in strange little jerks, and I tightened my hand on the railing beside me. If I’d not clutched it, I’d have tumbled back down the steps.

It was her. Charlotte. Mrs. Joseph Bristow.

The woman who’d been married to my husband in the years I believed I’d been his wife.

« Return to The Secret of Bow Lane