A Novel of Tudor England 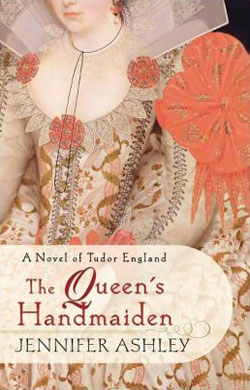 The morning in January 1547 when all our lives changed, I was sketching an idea for a new gown for Elizabeth. I wanted to try something in the French fashion, the sleeve caps puffed above the shoulders and stuffed with wool. I was not certain the style would become Elizabeth, who had fine white shoulders that looked well in the red damask I had made for her portrait, where the sleeves slipped the slightest bit to reveal bosom and shoulder.

“My brother has come,” Elizabeth announced from a window embrasure. “Why has he come?”

She peered out into the bright afternoon, which was already clouding over for more rain. Her red-gold hair hung long from a high forehead, parted in the middle to reveal a straight white streak of scalp.

“Someone else is with him. Those are not my brother’s banners.” Her pale lips thinned, and her brows drew together in disapproval.

I left my unsatisfactory drawing and came to the window. The milk-white skin of her throat smelled of lemons as I drew close to look. “Aunt Kat, come and see.”

Aunt Kat threw me an irritated glance. She had set her plump form before the fire, her feet on a stool, her book in her lap. Had it been only me in the room, she’d have stayed seated, but Elizabeth frowned down into the courtyard, impatient and curious.

Aunt Kat heaved herself to her feet. She came to the window, her wide skirts swaying, and looked over Elizabeth’s other shoulder. “It is Hertford,” she said crisply. “The earl of. Edward Seymour.”

Disapproval weighted her tone. Hertford was the older brother of Jane Seymour–Jane, who had caused Elizabeth’s mother to be sacrificed so that she could bear King Henry a son.

Aunt Kat had never met Anne Boleyn before her fall, but Aunt Kat’s love for Elizabeth extended to animosity to those who had hurt her, even indirectly. Jane’s hold over King Henry had caused Henry to declare Anne an adulteress, execute her, and proclaim Elizabeth a bastard and no heir to the throne. After Henry’s marriage to Catherine Parr, however, he restored Mary and Elizabeth with another act of succession, though Aunt Kat always grumbled that he took his time to do it.

The question was not naive. Her voice held calm determination to work out a puzzle. Her brother Edward coming here to Enfield was not strange. Edward and Elizabeth sometimes shared a house, with his entourage as a royal prince, with hers as Henry’s daughter, with Mary’s as princess, and with Jane Grey’s, granddaughter of Henry’s sister.

Not strange that Edward should be with his uncle Hertford. Still, there was something sinister in the way the banners closed around the small prince on his horse, surrounding him and cutting him off. Elizabeth scowled down at them, then turned away, the puzzle not forgotten.

“I will dress to meet my brother.”

Elizabeth was already perfectly splendid in blue velvet gown and gold kirtle, but she would never allow herself to be seen in less than her best on any occasion. The presence of Hertford made her determined to present herself in regal form.

Something was wrong. I sensed it, Aunt Kat sensed it, and one of Elizabeth’s gentlewomen, hastily sent for to help me dress her, sensed it as well. While a servant lit candles we slid a blue kirtle over Lady Elizabeth’s shoulders and helped her fasten on bodice and sleeves. I sewed a small tear in the blue satin sleeve, passing the silk thread through my mouth to make it slick. I turned Elizabeth to the window so I would have more light, and continued my stitching.

She looked out at the courtyard, where the horses and riders of Hertford’s entourage lingered. Blossoming candlelight reflected her in the glass, clear as a mirror. She had a long, rather narrow face, a small nose, slightly hooked, and pale lips. Her eyes, intelligent and alert, flicked from the men to the horses. She stroked one long finger down her bodice but not nervously.

In the reflection, I saw myself and Aunt Kat standing to either side of her, robust contrasts to Elizabeth’s aristocratic slenderness. Aunt Kat was a large woman. Her stiffened bodice pressed her belly into a narrow line, but skirt belled from her ample hips.

I took after Kat, being a little too plump, though my young body was not much larger than Lady Elizabeth’s. But while I looked as though I had a healthy appetite, Elizabeth was always thin. Her hair was red-gold, her father’s hair. I had my father’s hair too, but a dull brown-black. Aunt Kat and I had the same eyes, round and blue, both of us gazing at the world with frank interest.

Aunt Kat had much learning, as I said, much more than I, but the pair of us shared a curiosity that everyone one but us found unusual. Aunt Kat assuaged hers by reading books and learning languages; I assuaged mine by poking into things that did not concern me.

I and the gentlewoman pulled Elizabeth’s overdress over her, a robe-like garment that draped back from her silk kirtle in folds of velvet, soft as lamb’s wool. Despite Elizabeth’s preoccupation with her brother and his arrival, she scrutinized every inch of the gown and inspected the tear I had mended.

“My thanks, Eloise,” she said, as though I’d saved her favorite dog from drowning.

I did not follow the princess and her train of ladies through the house and downstairs for the meeting with Elizabeth and her brother the prince, but I did not long fret at being left behind. As soon as Elizabeth descended, Aunt Kat caught my hand and pulled me along the gallery. Hand in hand, silent as conspirators, we tiptoed along to another set of stairs down to the ground floor, and approached the great hall from behind.

On the dais, where the high table would sit if used, was a barred screen. The purpose of this was to provide a place to keep food warm while the servants served, but now Aunt Kat and I used it for the purpose of spying on those in the hall. We peered out through the slats just as Elizabeth and her retinue entered.

I had seen Prince Edward before, though not for many months. I always thought him a lackluster boy, even at only nine years old, and I did not change my opinion now. Fair-haired and pale-faced, Edward had a weak chin and a weaker mouth. He was not sickly, but an air of malaise hung about him even though he moved with a robust manner. He did not wear finery but riding clothes and eyed Elizabeth’s gown, sleek hair, and pearl-studded French hood with some aspersion.

Elizabeth halted and curtseyed to her brother. He politely bowed in return then his gaze moved to his uncle next to him.

Tall and bearded, Edward Seymour, Earl of Hertford, had an animated gleam in his dark eyes. Even from behind the screen I saw that he held his mouth straight with effort and moved his hands in an agitated manner.

Elizabeth waited for Hertford to acknowledge her. She was a king’s daughter; he merely the brother to a deceased queen. Hertford bowed to her almost as an afterthought, which I could see displeased her.

Before she could say anything to him, or even to her brother, Hertford dropped to one knee before Prince Edward.

I pressed my face to the bars. I saw that Hertford struggled to keep his mouth turned down, to present sorrow, but he was pretending. His fingers twitched, and his eyes sparkled with excitement every time he forgot to shield them.

“Your grace.” He took Edward’s hand and pressed it to his lips. “My lord of England.”

Elizabeth moved forward, skirts swishing across the geometric stones. “What are you saying? What about our father?” Her sharp voice held none of the hysteria of childhood, clearly seeing through Hertford’s posture of sorrow.

“My lady. Your Grace.” Hertford collected himself and settled his face into grim lines. “Your royal father is dead. I am the first to call His Grace King.”

Two things flashed through my mind, first, shock that King Henry, who seemed stubborn enough to live forever, was gone. It seemed unbelievable. Second, that Hertford hadn’t told Edward right away. He’d waited until the boy was with his sister. Out of kindness? I studied Hertford’s face. He certainly did not look at Edward kindly.

At that moment, Hertford bowed his head over Edward’s hand. “I swear to protect him from this moment with my life and give him my wisdom as though he were my own son.”

Beside me, Aunt Kat gave a loud, decided sniff.

No one in the tableau heard. They froze, all three of them, Elizabeth, a grand upright, her back straight, her face hard as marble. Edward, small, thin, and vulnerable. And Seymour, Earl of Hertford, crouched between them, his back a blank plane to Elizabeth, his face pressed to Edward’s hand. Edward, the new King of England began to cry.

« Return to Private: The Queen’s Handmaiden