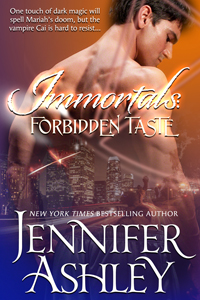 Mariah, a telepath for the paranormal division of the LAPD, is sent to find a vampire buried deep beneath a newly renovated vamp club. Mariah senses he’s an Old One, an ancient vamp from the dawn of time. She needs to get him behind bars and away from her, however, because letting a vamp come too close will drain her powers and render her helpless against the death-magic creatures who would love to see her dead.

Cai, who has been in dark sleep since his enemies buried him centuries ago, emerges into a brand new world. His rescuer is a beautiful human woman he desires, but touching her will hurt her more than he can stand. He’s already lost everyone dear to him and refuses to lose her as well, but when danger comes, the only choices they can make are heartbreaking ones.

This novella is also in Print bundled with Wolf Hunt.