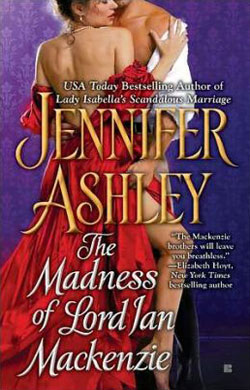 The Mackenzies series jumps around a bit in chronology after the first four books. Two lists are below: the first, publication order; the second, order in which events take place.

The Madness of Lord Ian Mackenzie

The Untamed Mackenzie (in print in The Scandalous Mackenzies)

The Wicked Deeds of Daniel Mackenzie

Scandal and the Duchess (in print in The Scandalous Mackenzies)

Rules for a Proper Governess

The Devilish Lord Will

A Rogue Meets a Scandalous Lady

Note: The Stolen Mackenzie Bride and the two books following it go into the past to the Mackenzie family’s role in the 1745-46 Jacobite uprising. It is NOT necessary to read these three books first. In fact, the series will make more sense if the starting point is The Madness of Lord Ian Mackenzie.

The Madness of Lord Ian Mackenzie (1881)

The Seduction of Elliot McBride (1884, June)

A Mackenzie Family Christmas: The Perfect Gift (1884, December; Note that this story takes place before the Epilogue in Duke’s Perfect Wife)

Scandal and the Duchess (1885, November)

Rules for a Proper Governess (1885, December)

The Wicked Deeds of Daniel Mackenzie (1890)

The Sinful Ways of Jamie Mackenzie (1908)

Writing a book series is a bit like producing a TV series–you never know whether you’ll be picked up for another season. Even if an author’s series does well, there is no guarantee a publisher will offer another contract, and this can happen for many reasons. For example, the publisher might go out of business; the publisher decides to change focus and phase out certain types of books; the author’s editor leaves and no other editor wants to continue the series. Contracts are usually for 2-3 books (sometimes 4-5; but mine are usually 2-3). Lots of things can go wrong in publishing, unfortunately, and many of those things have indeed happened to me!

Also, an author never knows from the outset whether a published series will be successful. If it isn’t, publishers will drop it after the first two or three books. It is extremely difficult in that case, to convince another publisher to pick you up.

Now that authors can self-publish, we don’t have to panic as much about being dropped; however when I first started this series the self-publish option wasn’t there. So, I made sure the first four brothers’ stories got told first! Duke’s Perfect Wife finished a contract, and I was happy to be offered another. I made sure Daniel’s book got into that one, even if I had to jump forward in time to do it. Then I was offered yet more contracts, so I backed up to pick up some other stories. I trusted that if I posted the date in the beginning of each book, my readers would get it.

I have more Mackenzie stories to tell, so we’ll see what the future holds!