Tales of the Shareem Volume 3 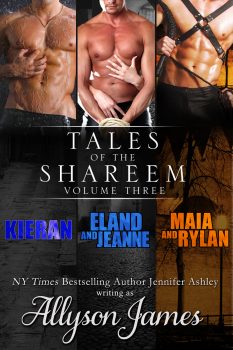 Tales of the Shareem, Volume 3, collects one novel (Kieran) and two shorter works (Maia and Rylan; Eland and Jeanne) into one set. Kieran: Kieran is meant to be the ultimate level-three Shareem, unthinking and sexually driven, without much emotion and personal thought. Now that he’s free of the experimenters who tortured him, he feels as though he’s two people—the Kieran who struggles to fit in even with other Shareem, and the Kieran who can become the commanding level three at the touch of a woman’s hand.

Kieran is the one sent to scope out the transports that might take Shareem away from their restricted life for good, but that plan goes awry when he stumbles across Felice, who is fleeing from a life of slavery to Bor Narga.

Felice stirs the level three in him, but Kieran responds to her as Kieran as well, finding in her a woman who understands him better than he understands himself. Kieran jeopardizes the safety and freedom of all Shareem by pausing to help Felice, but he also jeopardizes his heart, which was supposed to have been stripped of all deeper emotion.

Maia and Rylan: Maia is the only female Shareem ever created. Sequestered by the researchers at DNAmo, her lonely existence is made bearable only by Rylan, a level-two Shareem, who has found ways to meet her in secret. DNAmo, a genetic engineering company who makes the forbidden Shareem, is about to be shut down. Rylan promises Maia they’ll flee to the secluded canyons on the other side of the world and be together—always.

But on the chaotic day when DNAmo is forced to close, Rylan enters Maia’s room to find it empty, Maia gone. For the next twenty years, Rylan searches for her, barely clinging to hope. When finally, finally, it seems he’s found her at last, there’s a danger Maia won’t even remember him, and the bond between them will no longer exist.

Eland and Jeanne: Jeanne Narren is awakened one night by a pounding on her door—a huge, gorgeous man called Eland falls onto her, begging for water. Moved by compassion, Jeanne lets him in.

She does not know he is Shareem, a level three, fleeing the closure of DNAmo, and hunted through the streets. Eland is grateful for the help, but knows he can’t endanger Jeanne by staying. But Jeanne has treated him like a human being, not a lab experiment, and he can’t quite forget her.

Eland strives to stay alive and search the city for the Shareem called Rees, who might be able to help him off planet. At the same time Jeanne hunts for Eland, intrigued by this man with blue eyes who makes her feel beautiful. She meets other Shareem, and Judith, a bar owner who harbors them. When Eland finds Jeanne again, she is ready for the experience only Shareem can provide. But the danger is real, and Eland must flee or pay with his life.