Featured in the Private Places Anthology 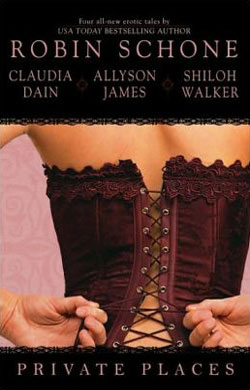 The man was stupid in his arrogance. It sounded to Michael as though Preston was denying Amelia funds from a trust her husband had set up for her. She could have a solicitor on him in a heartbeat.

If she could still afford a solicitor–her clothes spoke of genteel poverty with no pennies left over to hire someone to recover her money. Besides, many a solicitor or man of business might simply tell her to marry Preston–ladies were supposed to let gentlemen take care of them.

Amelia’s shoulders moved with her sharp breath, but she stood her ground. Good for her.

Beneath Michael’s rage, he wanted to laugh. She must have noted what he had during the weekend house party, that Preston couldn’t play cards worth a damn.

Unless, of course, Preston planned to cheat.

Michael walked forward. Preston’s friends noticed him with startled looks and retreated. Michael had a nasty reputation. A man who’d lived in exotic places, disappearing for years altogether, then turned up looking like a gypsy in Eastern garb with a daughter in tow, got talked about. Whispers of duels in Cairo’s streets, a Turkish harem, discovery of a great treasure, murder . . .

“An interesting bargain,” he said, pretending not to notice Amelia’s head jerk around, her azure eyes widen. “Except that you have no head for cards, Lockwood, and you know it. I suggest you let me sit in for you.”

Amelia’s gasp was audible. So was Preston’s. The man probably had been meaning to cheat.

“Why should you do this for me?” Preston asked. An excellent question.

Still Michael did not look at Amelia, who was glaring at him in palpable fury. She hadn’t forgiven him yet, and he couldn’t blame her one bit.

“I will name my price when I’ve finished the game.”

Preston gnawed his lip. He knew damn well Michael was the better player, having lost plenty already to him since the house party began. His indecision was comical.

One of his friends broke in. “We should let the lady decide. Who will you play, Mrs. Lockwood?”

“No, no,” Preston said petulantly. “This is my game, and Amelia has agreed to it. Very well, Your Grace, you may take up the cards for me.”

He stuck out his hand, not to Amelia, but to Michael. She was a prize, a woman to win, not a person.

Michael took the man’s hand, hiding his smile when Preston flinched at his extra-firm grip.

A Risqué Game of Piquet

Amelia shuffled the cards with her slender fingers. “I was raised to be a dutiful wife, obedient and uncomplaining.” She lifted a stubborn blue gaze to him. “But I am afraid I can be obedient and dutiful no longer, at least not tonight. Play cards with me, husband. I want to show you something.”

“It is far too dangerous for you to stay in this room.”

Michael stepped behind her chair and tilted her head back so she looked up at him. “You should be, my love.” He tightened his grasp. “I may not choose to let you go.”

“I am not going anywhere.”

Her eyes sparkled with determination. He couldn’t resist bending to kiss her eyelids, letting her lashes tickle his lips.

That led to kissing her mouth, tasting her upside down. Her chest rose, the loose dressing gown letting him see her soft depths.

She began to pull away from him, and he snapped to his senses and stood up. “You see? Far too dangerous.”

“I am not leaving, Michael. Do sit down and play cards with me. It is important.”

She had some bee in her bonnet, he decided. He’d humor her, but only for a while.

He made himself let go of her and dropped into the chair on the opposite side of the table. “What is all this about?”

“A simple game, my dear. We are both good players, so it will be an entertainment.”

He watched her smooth the cards and tried to restrain his wanting. “To divert us from our present troubles?”

“Partly.” She set the deck down, one finger touching the top card. “But the prizes will be interesting.”

“When we played before it was for money and marriage. Tonight we will play for other things.”

“Explain yourself before I combust, please.”

Her gaze flicked to him. “You seem in no imminent danger. A game goes to one hundred points. The first to reach will ask for a favor from the other. Anything we wish.” She cut the deck and touched the pile of cards to her lips. “To make it even more interesting, anyone who has pique, repique, or capot will gain additional favors.”

Suddenly hot, Michael unbuttoned his waistcoat then undid the hooks holding his shirt closed. A pique was scored by the player who gained thirty points before the dealer declared a single one. Repique happened when either player could declare thirty points before the cards were laid down in play, and the other had no points. Both situations were uncommon. Capot was difficult as well–taking every trick in the game.

The near-despair he’d felt all day suddenly lightened. Amelia was proving herself fine at coming up with distractions.

“And what exactly do you mean by favors?”

She sent him a secret smile. “You will simply have to win a few hands and find out.”

“Careful, love. Be so careful how you use that smile.”

“It is useless to try to frighten me, Michael,” she said. “I am determined.”

His own feral smile returned. “Oh, love, such a challenge. I pray you do not regret it.”